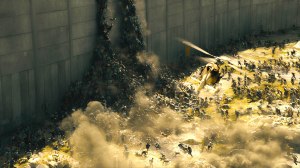 Let us please stop the madness. The genius, George A. Romero, laid it all out perfectly in his 1968 film Night of the Living Dead. He showed us that Zombies were slower, grimier, and deader versions of our neighbors. The hero of Night of the Living dead discovers their trouble with opening doors and fear of fire. These are staples. If we need earlier proof, look to what is perhaps the first zombie film, the 1932 White Zombie with Bela Lugosi. This is a great film and not just because the lead character is named Neil (…well, maybe), though the plot revolves around the seldom seen but always enjoyable voodoo zombies (*read footnote). It’s a lot to digest, I know, but returning to the point have we become so caught up on high-speed Internet and instant news that we have to have high-speed zombies to match? This is admittedly a premature rebuke of the coming film World War Z, based on Max Brooks’ novel. I promise not to be someone who blasts a film without seeing it but I must express certain reservations based on the trailer.

Zombies as we know are slow moving, dumb, decaying, and SLOW MOVING. The reason for their sluggishness is because they are, in fact, dead. These are decaying skin suits whose internal organs, with the exception of some (mind you some) brain function, are useless. Even the voodoo versions of the zombie are part of the unhurried masses as they are in a state of total daze and confusion. I give you “The Ritual” an excellent example of voodoo zombies from my favorite ghoul, the Crypt Keeper. (On a side note, watch Tales From the Crypt). Zombies, my friends, are hellish and frightening creatures, even at a snails pace. Don’t let big budget CGI productions fool you into thinking they understand how the undead work.

The real home of these decaying denizens is in the B-Horror movie section. This is where our nasty neighbors were first captured on celluloid. Remembering its B-Horror roots, the final insult to competent movie watchers was to shelf great minds like Tom Savini. This make-up mad genius brought the dead to life in such films as Friday the 13th, Day of the Dead, and Creepshow. I don’t need 3D to make a movie feel real (it doesn’t). I need top make-up men and women to stuff a pant leg with a hard salami and blood packets and then slice through it with a chainsaw.

I digress. The issue here is respecting a time-honored horror staple. A short while back, the movie 28 Days Later arrived on the scene. I know you think they were fast moving zombies when actually, little do people remember, they were infected with RAGE. In true horror fashion, an experiment with caged monkeys went horribly wrong and began infecting people with a type of rabies-like, rage inducing disease. This was a creative twist and perfectly acceptable. (We here at Glued 2 the Screen like to encourage creativity).

A Bruce Campbell, B-Horror junkie like myself could go on and on about the actual special effects that go into a film. However, in the interest of keeping this short, I reiterate—keep my zombies slow. We’ve run from them in Night of the Living Dead, we’ve hidden from them in a shopping mall courtesy of Dawn of the Dead and we’ve domesticated them in Fido. Let’s just stop speeding up and “CGI-ing” our zombies. We know what works and we know the kind of flesh eaters we love. I’ll follow up with you all with a detailed and most likely deranged analysis after a viewing of World War Z.

*This incarnation is seldom seen, as it is usually confined to Louisiana, Croatia, or other voodoo laden cultures and thus not usually seen in a blockbuster starring Brad Pitt. Further, a master magic man makes the voodoo zombie as opposed to radiation, toxic sludge, or reading from a book clearly marked with words like EVIL, DANGER, or PROPERTY OF SATAN. Just picture a deranged Gandalf shirtless on an island in the Caribbean, uttering something about not letting you pass as he sprays the Zombie dust over your voodoo doll.