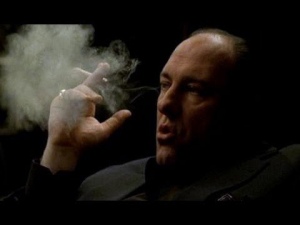 News reports claim that Gandolfini, 51, passed of a heart attack while on vacation with his family. Gandolfini was best known for his role as the deep thinking and pro-therapy Don of the Soprano family.

James holds three Emmy awards for his portrayal of HBO’s resident tough guy. The show aired on the network from 1999 to its finale in 2007, which, much like today, left us all wanting more.

Born in Westwood, NJ in 1961, James’ acting career didn’t take off until he was in his early thirties. His first memorable splash onto the big screen was as Virgil, the ruthless mob muscle in Quentin Tarantino’s True Romance. However, let no one make the mistake of believing his talents applied only to mob roles as his short 20 year acting career left behind numerous examples of his range.

A personal favorite was his portrayal of Leroy, a sensitive gay man who happens to be a psychotic killer in 2001’s The Mexican. He spent the majority of the film on screen with actress Julia Roberts, but more importantly, he stole most of the screen time with his brilliant performance.

We here at Glued 2 The Screen deeply regret the loss of an excellent actor and equally excellent man. The world was robbed of a genius that seemed to only improve with every role. We also extend our condolences to the family he leaves behind, wife Deborah and two children Michael and Liliana. He let us see, for a short while on screen, the brilliance that his family had the privilege of seeing every day. As fans mourn his passing, let us be thankful that he was blessed with such talent and in turn, he blessed through those talents.