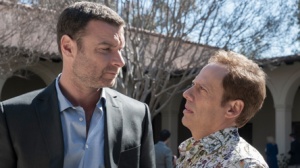 The Massachusetts native Ray Donovan moves to Los Angeles to do a little polishing to maintain the glitz and glamour. He is a “fixer,” sort of a Winston Wolf (for my fellow Pulp Fiction fans), who solves the problems of the rich and famous. While on the subject of rich and famous talent, let’s discuss some of the cast.

The character of Ray is given life by the surprisingly talented Liev Schreiber. Now, don’t go misunderstanding me. To describe him as “surprisingly talented” isn’t an insult. Whenever he’s cast in a flick we say, “Wow interesting choice” or, “I don’t know if he’s right for that,” but he always pleasantly surprises us by being the right choice and perfect for the part, whatever it may be. This role is no exception. Thanks to Mr. Schreiber the character is witty, tough, and cool with what’s becoming a trademark subtle smile somewhere in every episode.

To support Ray we have an aging and wild character named Ezra Goodman played by the aging and delightfully wild Elliot Gould. He plays Liev’s initial benefactor, confidant, and father figure, mostly because Ray’s real father has spent the last twenty years in prison. However, look out. Daddy’s home. Released from prison and just off an eye-opening plane ride cross-country Jon Voight (daddy Donovan) is in LA to stir the pot.

Jon is as goofy as he was as Joe Buck in Midnight Cowboy and as ruthless as he was in Anaconda (give that unsung classic the credit it deserves). He needs these two characteristics in order to play the wily old grandpa and the always-plotting father. He delivers these wildly offensive lines with such earnest purpose that you find yourself in hysterics, and quietly asking for more. Everyone needs to watch out because on the OFF chance the show tanks, I want this character to get a spinoff. Now, Ray may be the title tough guy but he had to learn it somewhere and after these few episodes it’s clear.

Apart from the characters, which are fantastic, we need to discuss who is responsible for their development. Creator of the show, Ann Biderman, is also the writer. She has crafted such works as 95’s Copycat, 96’s Primal Fear, and the 09 series Southland that just ended its fifth season. She can write drama no doubt but she can also successfully create and transport you to the environment of her characters. The later might even be the more important skill.

Leaving behind the details and the nitty gritty, let’s be real for a minute. It’s the summer and we want to be entertained. After playing, will dad grill the stake to juicy perfection or charred madness? We just want to kick our heels up and watch TV. Ray Donovan is the show to tune into. Ray is the man men want to be and the man women wont bring home (at least to see the folks). We need this series to give us all the summer adventure we’ve been craving. What’s even better is we get to go on this adventure every Sunday. This show, with its fantastical plot lines and thrills makes for a great ride. We can have the mundane day to day whenever we want but it’s the season of awesome. And that’s what we deserve, Awesome.

If you’re not one for totally outlandish plot and seemingly no consequences to Ray’s brand of problem solving, don’t worry. There is just enough room for someone watching the TV to say, “You know it could happen”. That grounding in somewhat-reality will keep you Glued 2 the Screen. It will also keep guys turning to their respective others with that look of “I’m as tough as he is, right honey?” in their eyes.

It’s not normal to dye an individual green from head to toe. But, it could happen.

As far as summer blockbusters go, this is the television equivalent. Enjoy it.