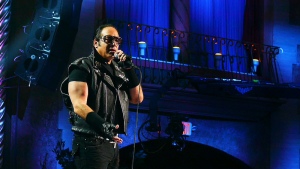 The Rock n’ Roll comedian/actor is back after a decade-long hiatus from the screen. For those who remember and those who will never forget, the Dice Man brings his edgy style to the new Woody Allen film, Blue Jasmine.

Some might ask why shine the light on Dice when the cast and crew is stocked with brand names. The answer is in the question.

As moviegoers, we’ve all seen these cats before. Alec Baldwin (whom I love in spite of his twitter madness and usual bad press) is great as we usually expect him to be. Cate Blanchett once again consumed the role she was playing, so the actress disappeared and the character was all that remained.

Andrew Dice Clay, on the other hand, is a surprise for a new generation. We all remember him in such classics as the short-lived series Crime Story and the uproarious Adventures of Ford Fairlane. We know he can act and we also know he can be hilarious but there is a whole generation that’s never heard about the Dice Man. This flick brings him back into focus.

Under the direction of curiously quirky Woody Allen, Andrew shines. In a plot that takes the Bernie Madoff scandal to your front door, Dice plays a man taken for a fortune by his sister-in-law and her husband. His appearance in the flick is far from the Elvis hair and studded leather jackets we’re used to but he hasn’t lost a step. In fact, this film is part two in what we hope is a three-stage comeback.

During 2011, the comedian played a version of himself on the hit series Entourage. He had been encountering such uninterested execs as Ari Gold (but far less hilarious) and was down on his luck. On the show, which was imitating life, his character was in the market for resurgence. Looking to “wow” audiences again, this role started a slow turn upward for the actor/comedian in real life.

Once again art-imitating life, the broke character in the film echoes Clay circa the last 7 years. With financial troubles and a Vegas gambling spree that worsened, the Rock Star comedian needed that stint on Entourage. From the series, Clay returned to his roots and rebuilt his stand up career (something we fans are thrilled about). After a comedy special and a permanent residency at the Hard Rock in the same Vegas that almost broke him, Woody came calling.

His movie career is interesting at best. I suppose you have to be a fan from the stand up days to enjoy his previous cinematic adventures. However, Blue Jasmine reveals a Dice Man with the talent we remember and a demeanor for every audience.