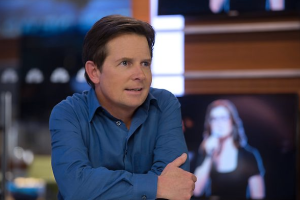 The Back to the Future star has returned to his home on the small screen, guaranteeing to wow audiences all over again in The Michael J. Fox Show airing Sept. 26 on NBC.

As the 80’s poster child, Fox appeared in some of the decade’s top grossing flicks, Back to the Future, Back to the Future Part II, and the always popular Teen Wolf. However, he might be best remembered by his television persona, the young and ultra conservative Alex P. Keaton from Family Ties. Airing from 1982-89, Family Ties successfully competed against such heavyweights as Growing Pains and The Cosby Show. For being all of 21 years of age, Fox was able to hold his own, proving television is his best medium.

Fox took a slight stumble in the 90’s as far as movie roles. The box office let downs of cult hits like Greedy, staring opposite Kirk Douglas, and The Frighteners (my personal Fox favorite) slowed his career.

Fox found redemption in his return television with the 1996 TV hit Spin City. Michael lasted 103 episodes before handing the reigns over to Charlie Sheen. During his time on the show Fox took home 3 Golden Globes, 1 Emmy (3 nominations), and a People’s Choice Award. Sadly we were absent his presence for a while after he was diagnosed with Parkinson’s disease.

Diagnosed in 1991, Fox contained the news for seven years before disclosing it and committing to the public battle against the disease. Retiring from Spin City, Fox formed The Michael J. Fox Foundation, designed to combat Parkinson’s on every level. Facts from that site show the enormous steps they have already taken. $350 million in research has been funded, 60 clinical trials have been supported by the program, and 88 cents of every donated dollar goes to research programs. Mr. Fox has spent his time wisely.

Now he is returning to TV yet again to win the hearts of a whole new generation on NBC’s The Michael J. Fox Show. The series depicts a Fox-like character living with this illness, but for the character and the real life Michael J. Fox, living with this disease hasn’t slowed them down. It changed his priorities from being the friendly face we visit once a week to the much-needed face of hope for millions of people afflicted with the disease.

Fox is representing far more then a willingness to return to work. He is demonstrating to all that a person has Parkinson’s, it doesn’t have them. Taking on the riggers of a weekly television show is another giant leap forward.

Obviously I suggest every household with a television tune in to watch the program, but I do so for two reasons. The first is to support a man who is one of the truly pure souls in the entertainment business. Having set good public and private examples for his viewers since the early 80’s I feel this show will be something for the whole family to watch. My second and final reason, Michael J. Fox is an extremely talented actor who even before Parkinson’s gave us 100%. So we can expect 200% now.