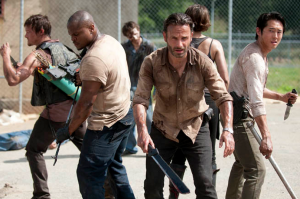 AMC announced that The Walking Dead will be getting a spin-off series after the crazy success it has been in its past three seasons, according to THR. The new show will be helmed by comic book creator Robert Krikman and executive producers on the current show, Gale Anne Hurd and Dave Alpert.

The Walking Dead universe is a vast one with many untold story lines waiting in the shadows. The franchise has already produced over 100 comic book issues, three television seasons and video games and there’s still much more to tap into.

That doesn’t mean that what we’re going to get will be good. We’ve seen plenty of TV spin-offs either fail miserably or crash and burn before they even got started. We obviously wouldn’t want to see that from our favorite zombie killers. Here are some brilliant suggestions from yours truly.

On his way to Hollywood to become a veterinarian for the pets of the rich and famous, hot-shot vet Frank Fox and his dog, Doggie Howser, set out for Tinseltown. Unfortunately the zombie outbreak occurs on their way and they get stuck in a small town. Now Dr. Fox has to treat all the zombie victims in the middle of nowhere even though his sights are set on the bright lights of Hollywood. And did I mention he’s only 14?!

Aliens are forced to leave their planet when a black hole threatens to destroy it. They have travelled lightyears when they stumble upon Earth; a perfect home to restart. Unfortunately for them it’s overrun with zombies who are running out of food. What a stroke of bad luck! Are the aliens advanced enough to survive another planet’s zombie apocalypse? What happens when an alien is bit by a zombie? Do they turn into a zombie-alien? The possibilities are endless!

In this hilarious new comedy, Johnny and Eric are best friends. Rudy and Tom are their zombie dads; and they’re moving in!  Watch as these two friends try to make it in New York City after the zombie apocalypse, while their dads cramp their style.

Real Housewives Of The Zombie Apocalypse

Follow five successful and ambitious women as they live their hectic lives balancing motherhood, social life, careers, and zombie attacks. This zombie apocalypse will put their friendship to the test, if they were even friends to begin with. Watch as these women are constantly at each other’s throats while a zombie is too!

Santa finds it odd that he hasn’t received any wish lists this year. Christmas is just around the corner and he has no idea what children want under their tree! Santa decides to leave the North Pole to find out what could be happening. When Santa reaches New York City he discovers that it has been taken over by zombies. He tries to fly back home but all of the Christmas spirit to power his sleigh was used up on the journey there. Now Santa, his reindeer and Snowflake the elf must fight their way back to Mrs. Claus and try save Christmas.

You don’t have to thank me, AMC. You’re welcome.