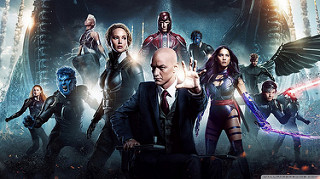 Bryan Singer rightfully deserves credit for birthing the modern superhero genre. Having directed “X-MEN” in 2000, Singer brought forth a movie that tackled actual issues. Sixteen years later the world has enjoyed over a decade of Marvel properties on the silver screen. Each film put out by this juggernaut of a company out produces the previous release at the box office. Where capes and destruction in a serialized “to be continued” way is capturing the hearts of millions of viewers the world over. What those films have been missing in most cases has been the minds.

X-MEN worked for several reasons. It was small, practical, and contained a message. There were no citywide destruction sequences or nuclear explosions but it was gripping nevertheless. Moreover it is without question the most diverse in terms of theme, race, and gender.

The original “X” series opens in a concentration camp circa the 1940s. This obviously is a bold move for a film in this genre. However, what is does is set the stage for a two hour long exploration of prejudice and acceptance in a way a majority of the population can understand. It does not preach at the viewer but instead offers a way to grasp these weighty concepts. The entire plot of the first revolves around a Nazi-esc legislative bill requiring mutants to register, hence the appropriateness of the setting of the start of the film.

In our modern world we see the distracting political fluff surrounding heinous and discriminatory legislation or attempted legislation in the areas associated with LGBT, race, or gender. At this point it should go without saying that “X-MEN Apocalypse” has much to live up to. With Bryan Singer back at the helm, hope ran high.

“X-Men: Apocalypse” misses the mark by fitting in. It’s an unusual critique to be sure. This latest installment has some successes but many structural failures. The opening portion of the film is essentially a recap of the lives of the known characters. As per usual there are some new players that need introducing and this process lacks finesse. The new additions don’t have time to endear themselves to the audience. This process is important so we can actually care about what happens to them. It’s an extra shame as they have some great actors in the ensemble that could really show us range.

In terms of fitting in, this installment changes its persona to look more like a Marvel movie. Again, I understand the confusion but X-MEN are a FOX property and thus separate from the Marvel Universe. However it would appear as if those over at FOX Studios made a conscious effort to look more like their successful counterpart. There is nothing wrong with those films yet we have come to expect a level of taste when watching Wolverine pop his claws (yes he is in this film).

While being the most visually interesting of the X-Series it is sadly the most thematically dull. They gave up on social drama and real life issues in favor of the violence and mechanical approach. Granted it’s called “Apocalypse” but with the main villain buried in emotionless makeup it feels more like a cartoon. The comics were so rich in their story telling ability it’s a shame this film let them down. The bright light is Quicksilver who steals our hearts and provides the most fun and interesting portion of the film.

It’s worth your money to see “X-MEN Apocalypse” but don’t expect to learn anything. To some I guess that’s a ringing endorsement.