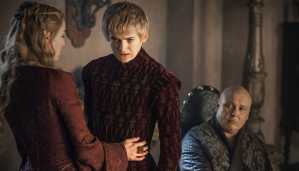 We certainly didn’t see enough of everyone’s favorite king to hate in Season 3 of GoT. Photo Credit: HBO via HBO.com

Warning: MAJOR SPOILERS to Season 3 of Game of Thrones lie ahead. Read at your own risk.

Is it just me, or did the season three finale of Game of Thrones leave a little something more to be desired?

Coming off of an episode as world shattering as “The Rains of Castamere,” the GoT finale could just not compete with its second-to-last episode. In case you haven’t noticed the pattern, the second-to-last episode of each season has been Game of Thrones‘ bread and butter. The problem with this is that final episodes can’t match, none more apparent than season three’s.

In the tenth episode of season one, we got to see Daenerys give birth to dragons and Jame Lannister was captured by the Starks. In season two we saw a huge white walker army marching towards The Wall.

This season? Aside from Jaime creepily returning to his sister Cersei and the events of the Red Wedding, everyone is mostly in the same position they’ve been in. Jon Snow is back at Castle Black, Bran is hanging out with Hodor, Arya is still no closer to her family as she runs around with the Hound, Daenerys is still building her army, Stannis is in that cave with Melisandre, Theon’s still being tortured (which was torture for everyone watching), etc, etc.

The status quo hasn’t really changed all that much. Aside from the Red Wedding, this season has been a filler and a setup for more to come. We’ve been overrun with dialogue, although mostly brilliant, and countless characters whose names I always have to look up and I still feel no closer to where we’re headed towards. Can we just get there already?

It’s getting a little frustrating for viewers as this season was possibly the weakest of the three and yet had possibly the greatest moment in the series.

That’s not to say there wasn’t plenty to love about this season of Thrones. Here are the best and worst parts of season 3:

This one’s a no brainer. No one saw this coming (unless you read the books). You may disagree with the deaths of the Starks and think that this belongs with the worst, but there’s no denying that it was one of the most shocking events in television history.

There was waaaay too little Joffrey Lannister in season three; so much so that he isn’t even everyone’s least favorite anymore. Joffrey is one of the most purely evil and despicable characters of all time. We need more than just an appearance here and there from him. People use the phrase “love to hate” pretty often but there was no one people loved to hate more than Joffrey. Have him start doing terrible things again, please.

Man this guy’s a badass. He just sits behind his desk and runs everybody in Westeros behind it. All of his moves are orchestrated through pen and paper or by intimidating people into doing his bidding. He is in complete control of everything going on around him and knew the whole time that he may have lost battles to Robb Stark but would ultimately win the war. All it took was a couple of promises and some gold to rid himself of “the Young Wolf.” Nobody messes with Tywin.

I get it, guy who read the books, there’s a reason he’s getting tortured, but right now it’s dumb. I’m almost sure we found out the reason in the finale and if it was only to hold Theon for ransom in order to get the Greyjoys to retreat, I’m extremely disappointed. (Clearly I haven’t read the books nor do I intend to until the show is over. Please don’t spoil it for me in the comments. Thank you). Just explain the deeper meaning to what’s going on or put Theon (and us) out of misery.