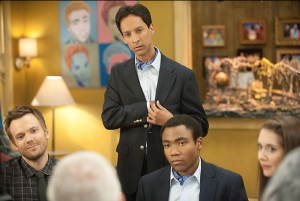 Remedial Chaos Theory is just one of many great Community episodes Harmon and McKenna influenced. Photo Credit: NBC via NBC.com

Dan Harmon and Chris McKenna are officially back on as executive producers for the much celebrated television series Community. Here’s to six seasons and a movie!

Harmon was fired after a third season that brought tension between the creator of the cult favorite comedy and the executives that put it on the air. In a rare move, Harmon is now being brought back for the fifth season after missing a fourth season that seemed to lack the misdirection that made the show so special while Harmon was at the helm.

Chris McKenna will also be brought back for the fifth season after a season-long hiatus. McKenna was a co-executive producer and left the show after Harmon’s unceremonious firing.

The two now return to a show that just barely survived without them. Will they be able to breathe new life (or should I say old life) into a series that has been on death row for the past couple of seasons? If their previous work is any indication, the answer is yes. Here are the top five episodes of Community written by Dan Harmon and Chris McKenna:

The second episode of Community was an important one. It helped establish relationships and character traits, like Pierce’s need to be accepted, and it introduced us to the amazing Señor Chang. Most importantly though, it brought us this:

Troy and Abed’s Spanish rap spawned one of the best friendships not only on the show, but on all of television. It also began the great credit scenes that we see after each episode. 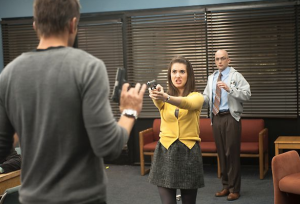 Too many conspiracies to keep track of. Photo Credit NBC via NBC.com

McKenna’s genius was demonstrated in this complicated episode that made sense but didn’t all at the same time. Jeff is almost caught by Dean Pelton when he makes up a class called “Conspiracy Theories” that is taught by Professor Professorson. It turns out that the class and Professorson were actually real, causing Annie to spiral down the road of conspiracies happening right under their nose at Greendale. This episode also featured the amazing blanket fort Troy and Abed build that everyone wishes they could have created as a child

This was one of the first episodes where viewers got to see some actual emotion from Abed. Harmon and Stamatopolous (Starburns) do a phenomenal job bringing feelings out of the robot-like Abed while still making sure Abed remained his quirky self by imagining a stop-motion Christmas special taking place around him. This was a great homage to Christmas specials and a great Christmas episode in general, but the best thing accomplished in this episode was reminding everyone that Abed’s human.

Everybody knows all about “the flashback” episode. It’s that one episode during a season where writers get lazy and just write a script where all of the characters are reminiscing about their past adventure and they show clips from previous episodes as their memory.

McKenna took this and flipped it on its head. In “Paradigms of Human Memory,” the study group is looking back on all of the crazy adventures they’ve had, the only thing is that we never saw these things actually happen in prior episodes. Instead, we’re presented with fake flashbacks of scenarios that were made up specifically for this episode. The episode also brought us these two gems: 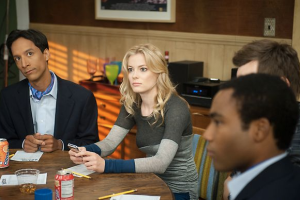 The important thing is the different relationships that are displayed throughout the episode. Each scenario displays a new interaction that helps to give the viewer a deeper understanding of each character.

Oh, and the “darkest timeline” is one of the most hilarious scenes in all of Community.