The often filthy, totally depraved, and wholly awesome graduation movie is a staple this time of year. These flicks show us what being happy school’s over is supposed to look like. Three of the all-time best grad movies (no matter whose list it is) are the ones that follow. For those who haven’t peeped these pictures yet, you have a perfectly good summer to make up for your transgression. Those of us that have are about to engage in a self-indulgent stroll down memory lane and discuss some of their finer moments. Here are my picks for Glued 2 The Screen’s favorite graduation movies: 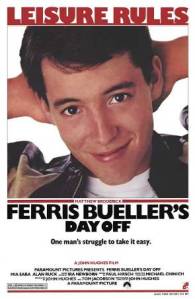 Bueller…Bueller…Bueller. This became the battle cry for a generation of bored high school seniors. Mathew Broderick, an interesting choice for a hero, leads us through his last day of playing hooky before graduation. Accompanying him in textbook, rebellious, student movie fashion is the best friend and token hot girlfriend, Sloane Peterson played by Mia Sara, much to the benefit of the audience.

The real show stealer was actually Principle Rooney (I know, I can’t believe I gave top billing to the principle over Mia Sara either). Truth be told, prior to his submission to girth, Jeffery Jones was brilliantly funny. Chasing down Ferris at every turn and a brief karate fighting episode with Jennifer Grey (circa original nose), he was the authority figure you loved to hate.

Was it over when the Germans bombed Pearl Harbor? Hell no! Photo Credit: Wiki Media

Now prepare for Animal House, or should I just say…Ramming Speed! D-Day, Pinto and the gang at the Delta Frat House mastered the total chaos and debauchery expected of a film in this genre. Director John Landis’ 1978 low-budget comedy is the perfect college movie in too many ways to mention. There are horse shenanigans, pillow fights, hot chicks, cool cars, great music, TOGA’S and hot chicks, all complete with an appearance from a pot smoking, English teaching, super groovy Donald Sutherland. As if we needed more, the late John Belushi’s facial expressions in the flick were almost funnier than his lines.

It’s a hilarious flick that’s just as relevant today as it was then. The harsh undertones concerning the Vietnam War, race issues, and authority figures are matched by the uproarious overtones of sex, friendship, and general awesomeness. I guarantee if you don’t own this movie, you will know someone who does. So call that hero immediately and find out what you do with 10,000 marbles. 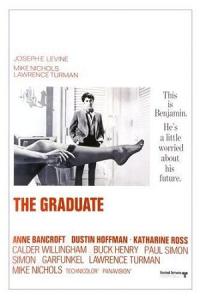 The quintessential graduation movie (not just in name only) is The Graduate. Now, if you’re here for the Singlemen party, I can’t help you. However, if you’re here to recount the coming of age tail of Ben Braddock, then keep on reading. Ben, played by Dustin Hoffman, learns some very important lessons throughout the picture. He learns that it is very difficult to convince the daughter of the woman you slept with to date you. We probably knew that one. He should have as well because, after all, his dad is Mr. Feeny. That’s right kids, beloved sixth grade teacher William Daniels is Dustin’s father. But not even Mr. Feeny knew the key to the future was “Just one word: plastics”. Can you think of anything better than knowing the future and having William Daniels as your father?

How about a love affair with Anne Bancroft? A 1967 Ms. Bancroft was a sight to see (and we did) and she took quite the shine to young Ben. I don’t want to spoil too much of the plot for those who haven’t seen it yet, so I’ll leave it there. On a serious note, it is the crucial grad movie because it shows you how to strip yourself of inhibition, overpowering parents, and ultimately find yourself.

There are a great many other flicks that fit the category, but I was compelled to write about these. If you had a forum like this and just watched any one of these pictures, you would have to exclaim your praise as well. Further, they take place in three very different settings. I chose them because they hold up pretty well and if you breathe, you will most assuredly laugh. Enjoy, either for the first time or the hundredth, because tis the season for raunchy school humor.