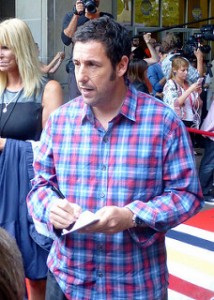 Many of you may not know that my faith in Adam Sandler has been weaning these past 8 years or so. Movies like Funny People began the downward spiral and the now legendarily bad (almost Gigli level bad) Jack and Jill killed the once shining star. Now, let me pause a moment and say I encourage dissent and argument. These are simply the opinions of one man with a blog and a podcast. You may respond in as polite a way as you possibly can while remembering film and entertainment are subjective media. I don’t hate Sandler but he is not reaching his potential. At least that was true until I saw Pixels. First, we get the bad and the ugly out of the way before launching into the grand.

Funny People’s sardonic look at the lives of well, funny people, was poignant but lacked the necessary balance. Comedy is a hard enough genre and does take its toll on the performer as the flick shows us. So let’s not try to overburden the film with a contrived cancer story that appears to be stuck in with no memorable or logical purpose. Granted this was a Judd Apatow script, and we love him, but it marks so slow slant down for Adam.

Jack and Jill on the other hand has almost no redeeming qualities. Born right from Adam’s usually brilliant and comedic mind this one sank like a stone. I considered tagging this at the end of the Funny People paragraph as there is really no way to create enough sentences about this terrorist torture tactic of a film. (This was a harsh criticism but hey we may repost this during sweeps week) We did all laugh and cringe when Al Pacino dove onto the bed and wriggled around on “Jill’s” ginormous sweat stain. The problem was we cringed harder then we laughed.

All bad things end however while they await a whole new wave of terrible. And during this hiatus from horrible films we get a gem, Pixels. This is an exciting romp that reminds us we like Adam and his friends. The concept is great. During the 1950’s the science fiction craze took over with the birth of rockets, the space age, and and the Cold War. By the 80’s we decided, having been into space ourselves that we ought to attempt communication with possible advanced lifeforms. We did so in real life by sending “time capsule-esc” pods into space. Naturally the best way to immortalize Earthlings was to record a video game competition on betamax. (A technology that disappeared moments after its creation) A further note on Beta-tech, if three-quarters of Earth didn’t have a compatible system to play the tape I doubt the Klingons or whatever alien life found it would. But hey, we love to suspend reality here at Glued to the Screen and believe me that is the most unrealistic part of the plot.

Once they realize the Aliens have duplicated all our old favorite arcade games aka. Pac-Man the movie hits high gear. Alongside President Kevin James and fellow video gamers Josh Gad and Peter Dinklage aliens stand no chance. National security calls in Geek-Squad member, Adam to put together his team of aptly named Arcaders to save the planet. The bright lights and big city of it all keeps you interested and the humor brings it home. There are enough innuendo to keep the adults happy while the slapstick isn’t so over the top that the 12 year olds complain. It is just plain fun with no extra nonsense in the way.

A lesson or two about cheating and judgment was taught to the audience. Yet the flick wasn’t preachy. The New York live action Pac-attack was glorious and every nerds dream. So to close, shout out to Dinklage who liked like he had the most fun being crazy and props to Martha Stewart. (if you haven’t seen the film you will love her in it)

That is it for me here except to say I’m glad to have Sandler back in my good graces and hope the streak continues.