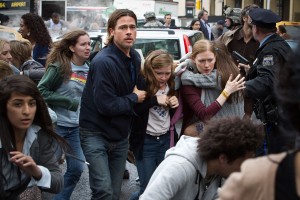 As most know, the film is based on the novel by Max Brooks, son of comedy legend Mel Brooks. His literary work became an instant classic and spawned a series of “How to Survive Zombies” books. This novel caused some problems as the film version has two immediate groups of critics: those that feel the film doesn’t represent the book correctly and those like myself who believe in strict adherence to zombie lore.

My views on the undead should be fairly clear from my previous article on World War Z. To reiterate, I feel Zombies should be slow moving creatures that are most dangerous at night when you can’t see them sneak up on you. Zombie films should be of the low budget, “do it yourself” variety.

Clocking in at over $170 million in World War Z is no low budget flick, but I give my stamp of approval regardless, for several reasons. As long as you accept that this is a major motion picture going into the theater, you can appreciate the finer points:

Makeshift Weapons: Fighting the undead isn’t a natural occurrence. There is no Boy Scout badge for best construction of an anti-zombie tool. That is why I appreciated the ingenuity of Max Brooks and, by extension, Brad Pitt. The use of magazines as body armor and duct tape to create a bayonet is brilliance. Also, the return of classics like an axe and crowbar was very nice.

Makeup Masters: The film didn’t make use of my favorite effects man, Tom Savini (he of Day of the Dead fame) but it did a fine job on its own. They could have made every Zombie CGI but instead they used a respectable amount of made-up extras. This can only help a horror movie. When you pit a character against a foe that is in the room with him, not just on a green-screen, the acting improves exponentially. A specific example to look out for is the zombie doctor in vault 138.

Zombie Lore: Though it seemed to go its own way, at times the flick stayed true to certain essential aspects. What stayed the most true was how to destroy an undead individual. Destruction of the head or burning of the body is the natural way to dispose of these creatures. My disagreement here comes from the fact that most seemed to keep moving after a shot to the head or even burning. Remember, it is the limited brain function that keeps these suckers moving. Thus, destroy the brain and stop the body.

Newark: I’m from Jersey and I thought having a moment in the Garden State was genius. Some may say there is already a zombie outbreak there (maybe more than some) but that part of the film was great. We get reminded of the old Romero movies as Brad Pitt tries to find a safe haven for his family. Holding up for the night behind enemy lines is a keystone part of a zombie movie.

Unique Outbreak: There is a great moment in the film where they discuss Mother Nature. She develops diseases and attacks the human race at will. This is the idea behind the outbreak. Mother Nature has just struck the world with a new disease (aka zombification). It strays from older means of arrival but still it works.

Despite all its great aspects, World War Z does have its flaws. Rather than list them like the positives, I’d prefer to briefly mention them here. As the movie surpassed my expectations, I’ll cut it some slack.

Top among these flaws is that these zombies move too damn fast. The scene where they are swarming up the wall in Israel goes against everything zombies stand for. It didn’t overuse CGI for a big budget film, but the wall scene was a gross misuse of it.

That being said, I have to give this film high marks for its ingenuity and final chapter. World War Z showed us something we true fans have been waiting to see. Humans finally retreated to the ocean, which is the only safe place, creating a floating retreat using aircraft carriers and cruise ships. As for Brad Pitt, I would have given him a different haircut, but it was otherwise a brilliant performance.

The final half of the film brings us back to the old time B-Horror roots these hellish creatures stem from. Overall, the film could have collapsed based on the fact that they bounced around the world. Taking on too much might have destroyed the film but they did it in a fairly judicious manner, making a few stops that ultimately brought the audience to the answer. Once in the World Health Organization building for the final portion of the movie, the mood slows and fans like me feel at home again.

Go see the World War Z. Unlike major movies as of late, it doesn’t feel like a marathon. Coming in under two hours, the filmmakers bring us from outbreak to hope of resurrecting humanity. You will enjoy it and it will make for a great night at the theater.

One thought on “World War Z Review: More Than Just An Excuse To Capitalize On The Zombie Craze”