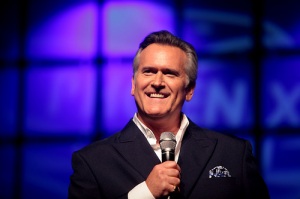 All should hail the awesome phenomenon that is the Comic Con. Too often in life we hear of horrible events occurring at major gatherings. However, Comic Con is perhaps the happiest place on Earth. Within the hallowed halls of the Jacob Javits Center humor, joy, and kindness abound. That is unless you are haggling over the price of a vintage, 19 issue Batman series. Because then it can get serious quick. There are obvious pros such as the cosplay both sexy and psychotic as well as the sneak peek panels. New York’s 2015 Comic Convention was no let down, brining forth a plethora of news and merch for the fans.

Some of the highlights included panels on Ash v. The Evil Dead, Netflix’s Jessica Jones, and The X-Files. To start with all three showed their first episodes for the first time anywhere to the New York audience. Reports from viewers give all three shows seller reviews. Moreover there is no shortage of spoilers and tidbits to dish out. Yet as a true fan of the medium and an appreciator of the sanctity of NYCC we’ll only talk about the fun stuff to build excitement. To keep it short and sweet here are the need to knows:

Tune in to see our reviews of the first episodes.