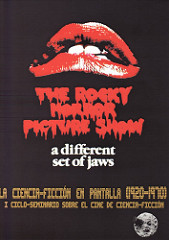 We are in the heart of the Halloween season and as such television is rife with scary movies. Sadly, the last few years have been marred by remakes. Have all the original ideas left us? Are we now resigned to reviewing and reimagining the past? I’ll admit I’m not totally against every incarnation or more accurately reincarnation of hit films. Cape Fear, Amityville Horror, and hell even The Wiz were worthwhile endeavors. However there are some titles that ought to be off limits.

The Rocky Horror Picture Show (1975) is one such film that is so niche in its style that a remake is repugnant to its followers. At the time of its release Rocky Horror was pushing boundaries of acceptable behavior both in society and film. For just under two hours the entire cast is dressed in drag, committing sexual innuendo, and launching a full out assault on the squares. It was so unique and special that it has lasted lovingly for four decades.

Fox isn’t the first to stage a reproduction of the stage show. Over the years the month of October has become home to stage productions with the film playing in the background. The interactive nature of these shows i.e. throwing toast when Frank-N-Furter makes his speech and firing water guns at the crowd to simulate rain are but of few examples of the acceptable reimagining methods. The common thread is the original movie playing in the backdrop of the stage. Suffice it to say there is a cult following out there that has strong opinions, so let’s analyze this remake.

Let’s start with the essence as they completely missed the mark. At the heart of the film there is a story of sexual exploration and liberation. Not to mention an effective allusion to the mad scientists typified by the B-horror movies of the time. Ultimately the characters were multi dimensional and captivated the audience while creating an over the top escape. Tim Curry was loud and brash while writer Richard O’Brien better known as Riff Raff was the perfect Igor. The modern rendition lacked those elements.

Taking over for Tim was Laverne Cox of Orange is the New Black fame. She was flat and seemed more occupied with appearing weird then generating weird. The songs lacked bounce and fun and the supporting cast were hemmed in by the restrictions of network media. The place for The Rocky Horror Picture Show was not FOX but HBO or Showtime. Topics like these need room to run.

Their problem was the aspect of reimagining the product. It didn’t work as a stand-alone or as homage. Without beating the issue to death you either remake a movie like Rocky Horror word for word or not at all. If you PG this cult classic than it is not the film you remember. Also you can’t conduct the process without depth otherwise its just futile and a meaningless experience for the fans. Even with Tim Curry appearing as the criminologist and by extension giving his blessing this effort, still fell flat. I applaud the effort as this is an almost insurmountable task. The deck was stacked against them from the jump we should have avoided the endeavor.