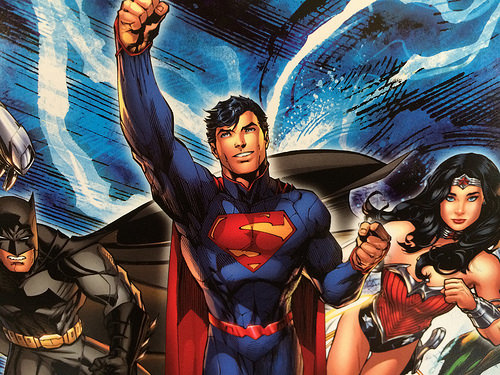 Life is all about choices and there were definitely some good and bad ones made in Batman V Superman: Dawn of Justice. It was a serviceable flick for the general public and the comic reading crowd. The internet has been trashing the film within moments of its release. Critics tend to miss some important elements when it comes to the comic origins of these films. They discuss style, technique, and often appeal to the most populist viewpoints. The only opinions that matter in when dealing with DC Universe movie are the true fans. As one I’ll give you the good and bad.

Let’s get the average machinations out of the way. Calling a film serviceable is not an insult in as much as it says “people will watch this”. It combined story with action making for a generally appealing mix. The parents in the audience had something to watch while the kids waited for the Bat and the Alien to attack each other. The story was stale, I admit this freely knowing there are redeeming qualities. We’ve all seen the Wayne murders and didn’t need the reminder at the onset. Further, the acting chops of Henry Cavill leave us longing for the camp of Christopher Reeve.

The largest detractor in this film is not the high pitched stylings of Jesse Eisenberg, though they are terrible. No, in fact the true evil is Zack Snyder (he gets no hyperlink cause he sucks). BVS is the beautiful daughter with limitless potential and Zack Snyder is her douce-bag boyfriend you wish she would break up with. We all saw the train wreck that was Man of Steel (again no hyperlink). Why would you allow the director of such a movement, more bowel than motion picture, to head up part two? He brings almost nothing innovative to the process just a fast paced account absent your basic film school tricks. Eisenberg was channeling the joker mixed with manic persona. Acting is also about choices and he made the wrong one.

DC has its roots in these tentpole characters and thus it makes sense to combine the worlds. The problem begins with the discrepancy in character motivations. Superman throughout the years was a boy-scout while Batman was the results by any means detective. Superman is appalled by the tactics of the Dark Knight while the brooding bat envies and distrusts the Aliens abilities.

BVS appears rooted in the Frank Miller style and universe. The bat has the grey cloth uniform with a kick ass cowl and short ears. More importantly, while the Dark Knight awaits the beginning of what will be a battle of man verse a god, he stares up with White glowing eyes. It means very little to a casual observer but it’s the world to us. That metallic uniform designed special for Superman is right off the Miller page. Ben Affleck is terrific, carrying decades of Batman lore on his shoulders. This version of Bruce Wayne is for Miller fans, and advocates the angrier Batman in general. Some were appalled by the brutally and violence but remember he has been at this job for 20 years. Further, we see Wonder Woman, Flash, Aquaman, and Cyborg (if you can believe it). There are elements of time travel seen in the DC television universe as well as the comic page. Moreover, it is likely done by Flash himself in a powerful, all be it unexplained, dream sequence. Darkside’s Omega symbol and Parademons are clearly visible.

See, the iterations prior to BVS are beloved and enjoyable but lack this fan-film quality. The tidbits and cameos (not just of the league members) are glorious. Superman’s uniform is brighter and the destruction of Man of Steel has been put on lock. It was made very obvious that the studio learned its lesson and stopped pretend killing every innocent person insight.

After a lifetime for most we finally see the titans in live action on the screen. It is not the best it can be and frankly I look forward to a singular Batman movie but at least it’s a start. With Superman more or less incapacitated and the other league members discovered but yet to be contacted we can refocus on the strongest elements of the film going forward. Darkside is looming for a Justice League flick and Doomsday appeared almost as he should. Doomsday’s downfall was Snyder’s inability to capture him in a way that made us interested. Monsters are fast and easy to kill. Masterminds like Luthor should have been are the true meat and potatoes of the movie biz. It was great watching Affleck come to terms with having to take on a suicide mission to kill the Man of Steel.

In all  the critics are right the film needs work but he Fans will enjoy the effort.

One thought on “Dawn of Justice: Deserves Some!!!!”